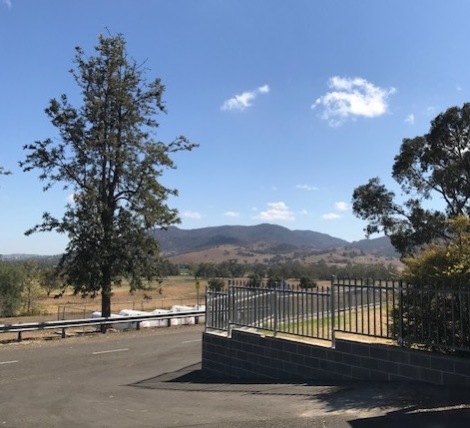 My final presentation for the Peel Valley ETA HSC English Study Day was Mark Haddon’s compelling and quirky The Curious Incident of the Dog in the Night-time for Module B: Close Study of Literature.

All quotes and examples are taken from the 2004 edition:

you may need to search a little if you have a different edition.

Know your module rubric! In your response for a Module B question, you must include the distinctive textual features that make this novel unique.

Also include terms from the metalanguage of English, particularly those that are relevant for a novel. Haddon should be acknowledged as the writer or author, the creator of these characters: it is Haddon’s language choices that take use into the world of this novel.

Context, audience and purpose are key underlying ideas in English: the author’s context informs their language choices that, in turn, engage the reader. For purpose, those suggested in the above slide, include words from the rubric, although when we read a novel, we actually do learn about ourselves and the wider world. References to context, audience and purpose could be included in your introduction and/or body paragraphs. 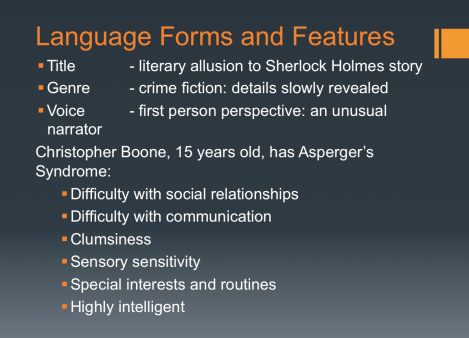 When you identify the title in your introduction, include the literary allusion to Sherlock Holmes as a way of stating the genre. You might also mention the unusual narrator whose first person perspective takes us into his world. These are examples of embedding metalanguage into your response and lifting the tone of your argument.

Throughout your discussion, include structural terms from this linear narrative graphic. 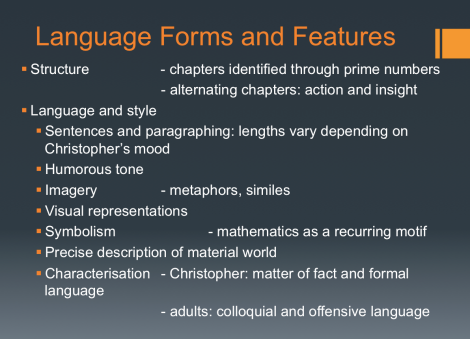 Structure can also be discussed in terms of chapters identified through prime numbers. On page 15, Christopher explains that ‘Prime numbers are what’s left when you have taken all the patterns away’ reminding us of his need for order. The alternating chapter lengths also suggest the shifting pace of the narrative.  Chapter 179 (p. 158) is sixteen pages long and is a reflective rumination of Christopher looking at the sky and pondering his Swiss army knife. This is followed by the brief Chapter 181 which reveals a shift in pace. Whichever evidence you include, it must support your argument – the lengthy chapters display Christopher’s need to stop and clam himself after periods of intense change; change typically destabilises his ability to function effectively.

Sentence and paragraphing lengths help us understand the protagonist’s state of mind. In Chapter 191, Haddon begins many sentences with the conjunction ‘and’ this use of anaphora creates a sense of slowly rising panic as Christopher considers the station maps.

In Chapter 29 (p. 19), Christopher discusses his understanding of metaphors and identifies several cliches in a bold list. There are different uses for similes in The Curious Incident of the Dog in the Night-time. Early in the narrative, the police questions ‘stacking up like loaves’ reveal an agitated state, whereas Christopher’s comparison of a rubbish lid that ‘looked like the surface of a planet’ has a calming effect.

Consider the use of visual representations, such as timetables, graphs and maps as evidence of Christopher’s need to live an organised life, whereas the use of symbolic representations in the form of simple facial expressions remind us of his difficulty in communicating.

Evidence of Christopher’s formal language use can be found on page 9:

And this is when I hit him.

Chapter 13 begins on the next page and opens with this:

This will not be a funny book.

Haddon’s use of humour through irony and sarcasm helps the reader connect with Christopher, as well as challenge our own behaviour when interacting with unwell or disabled people. Later, on page 176, Christopher admits he told a lie in Chapter 13 – ‘I cannot tell jokes’ – yet then shares a joke about cows, economists, logicians and mathematician. This admission reveal the growing awareness of Christopher in dealing with his wider world.

In contrast to Christopher’s use of formal language, other characters use colloquial language such as the police officer’s ‘okey doke’ (p. 11) and another’s declaration ‘I’m stuck on the bloody train’ (p.198). These examples serve to highlight the stereotypical, and generalised, lack of respect when people are interacting with unwell and disabled people. 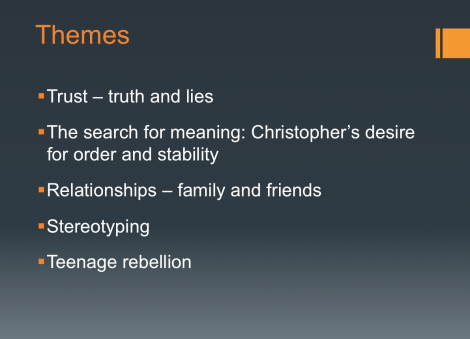 Consider Haddon’s stereotypical characterisation of single parents, neighbours, police officers, teachers and commuters. If you identify this text as an example of the crime genre, partly due to the slowly revealed facts, there is still room to mention elements of teenage rebellion. Doesn’t Christopher challenge authority and leave home? 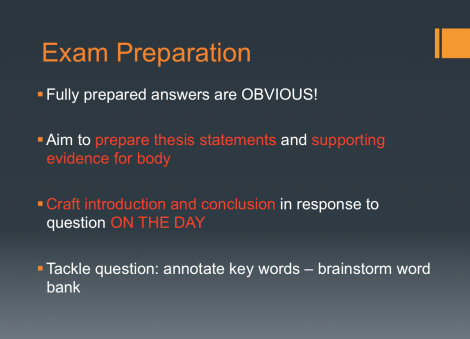 Knowing your rubric, and a range of synonyms for key terms, will help you unpack the question and begin developing a plan for your response. Annotate the exam paper, and return to these lists after each paragraph – stretch your cramping fingers, take a deep breath, and begin each new paragraph with a renewed sense of purpose.

In this sample paragraph, the following elements are highlighted:

When checking your drafts before re-writing, make sure you can identify all of these elements in each body paragraph.

This review of The Curious Incident of the Dog in the Night-time, by Jerry Turcotte, has some well written phrases that make useful models when structuring sentences. 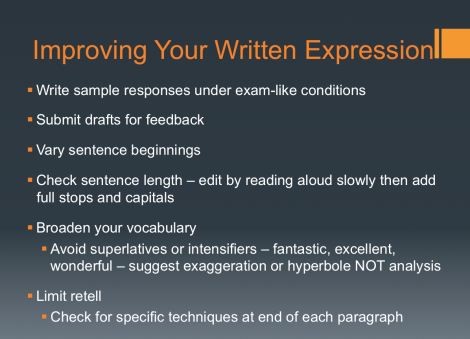 Read the 2015 Cambridge Checkpoints essay on The Curious Incident of the Dog in the Night-time. How could you improve this response? Start with a conceptual thesis to open your introduction.

2 responses to “Curious Incident of the Dog in the Night-time: Close Study of Literature”