I first read about this ingenious idea in an online article at Electric Literature. I shared this article, and waited for the perfect teaching moment. That moment arrived on Friday afternoon when we had most a lesson left after marking senior multimodal presentations.

Jed’s stories are made entirely from sentences found in various dictionaries, so my instructions to the class were simple: grab a dictionary and find a sentence. We shared these on the board:

Keep the prisoners under close guard.

After the interval we resumed our seats.

He pushed in front of me.

He was intransigent especially in politics.

We took our dog for a walk.

The truth dawned on him.

His ideas are sound.

I dictated a series of options:

This final option was overwhelmingly popular, and so began much concentration and a little consternation. We agreed that only minimal changes could be made, such as punctuation or perhaps replacing a capital for a lowercase letter. Then the giggling began, and we shared some very interesting stories. 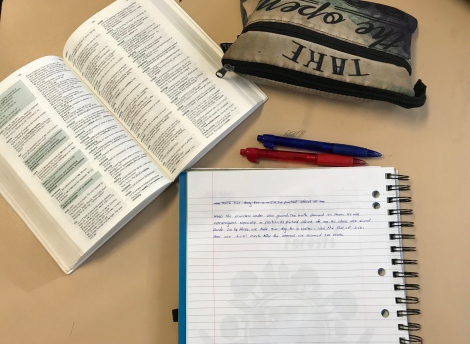 It seemed many students placed some sentences in a similar order. Clearly, Jed has developed a system of categorising sentences collected from many dictionaries since his first stories appeared in zines. Yet this exercise served a purpose: allowing students to engage with language for fun.

Next, I instructed students to write each letter of the alphabet down their page. The challenge was to write a story using a word beginning with each letter, in order. Many consulted dictionaries, especially for tricky letters like ‘x’. I mentioned that this was an activity I tried to complete at uni – designed as a warm-up exercise before writing.

though this proved to be quite amusing, too.

Perhaps it was the relief of finishing an assessment, or the last lesson of the second last Friday of term, or just a fun writing afternoon.

Read more of Jed’s stories and watch videos on the Dictionary Stories blog. I plan to use these as samples in future writing lessons.