What an enjoyable and thought provoking session this turned out to be! Mark Rubbo introduced Richard who promptly thanked Mark, and described him as the ‘doyen’ of independent booksellers. He went on to explain that Australia is quite unique – 35% of all books here are sold through independent bookshops. In the UK, that figure drops to 3-7% due to the ‘poisonous and destructive’ impact of Amazon, which then flows onto literary culture. 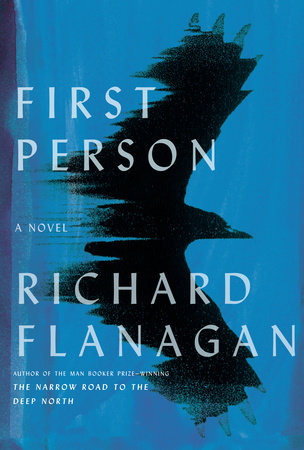 The inside book cover blurb reads:

A young and penniless writer, Kif Kehlmann, is rung in the middle of the night by the notorious con man and corporate criminal, Siegfried Heidl. About to go to trial for defrauding the banks of $700 million, Heidl proposes a deal: $10,000 for Kehlmann to ghost write his memoir in six weeks.

But as the writing gets under way, Kehlmann begins to fear that he is being corrupted by Heidl. As the deadline draws closer, he becomes ever more unsure if he is ghost writing a memoir, or if Heidl is rewriting him – his life, his future. Everything that was certain grows uncertain as he begins to wonder: who is Seigfried Heidl – and who is Kif Kehlmann?

Richard suggested that after the fall of communism, the market has taken the role of social change and control. Previously, politics and government was the mechanism for dealing with ‘problems’ – ‘it’s too easy to blame the execs’, referring to the ‘sins of the banks’ as we have been living in a marketised world for at least 20-30 years. Our rule of law derives from ideas that are found in books, and discussions about books with ideas.

First Person took several years to write, and in fact some jokes about Trump had to be erased once he became a presidential candidate. It is an exploration of Heild’s solipsism and narcissism, and the character’s belief that the world was evil as seen through his self-focused eyes. Richard suggests this is the guiding spiritual development of the last few decades, enhanced by the popularity of social media where ‘everyone is the centre of their own universe’. He quotes Zuckerberg: privacy is no longer the social norm – we will only have authenticity in our online life. Gabriel Garcia Marquez suggested that everyone has three lives: public, private and secret. We come to understand ourselves through art and literature, and that there is the possibility of many selves. In recent years, Richard suggests that the memoir has outstripped the novel, with a suggestion that the novel form is redundant – memoir has replaced the power of fiction.

Yet untruth has outstripped the possibility of truth. Novels are valuable to reveal humanity and ourselves, so First Person is a novel in defence of the novel form, though it purports to be a memoir but the reader quickly realises it is not a memoir.

If there is no objective truth, all we are left with is opinion, and those opinions heard will those with wealth and power. This leads to a very dark place. These ideas are expressed in Richard’s address to the National Press Club on april 18, 2018.

Richard discussed his writing process, and suggested that the last person who should be asked about a novel is the writer. He believes that ‘you only discover your book after other people have read it – many have suggested that First Person is Faustian: ‘I’ll take that’ he commented cheekily. When writing, really, it’s good to abandon grand ideas and submit yourself to the story – goals become irrelevant as the story evolves. ‘Let the small ideas and cheap ambitions go – or send them out in a tweet and forget writing the book.’

As an example of following where the story takes you, Richard commented that Tolstoy wanted to write a book about a wicked woman who is punished for her behaviour, but ended up with Anna Karenina. It’s best to trust the mystery of a story.

Asked about the development of his characters, and suggestions that different ‘real’ people can be identified in First Person, Richard said it’s more fun to take personal aspects of many people – it would be boring if I modelled a character on one person. As an analogy he mentioned a simple cake: made from eggs, flour, milk, and sugar, it has endless opportunities in it’s final composition through the different amounts of ingredients. ‘You wouldn’t make a very good cake if you just used flour.’ He feels it is important to make characters serve a purpose, and doesn’t understand the idea (he thinks comes from US creative writing courses) that characters walk onto the page and take over a story. He shared a quote from Nabakov, who was asked about his characters and their agency, and replied ‘my characters are galley slaves’.

In response to a question asking if he reads reviews of his work, Richard said ‘it’s an act of courage looking the mirror each morning to shave’, and that reading about yourself is ‘corrosive to the soul’. He suggest that reading is a deeply private act, and is increasingly subversive to seek out and read books with alternative ideas to those presented in mainstream media and online.

While writing this book, he mentioned that Trump rose to power, and although Trump embodies many things, he is just ‘the infection on a long standing wound’. He also read many works by women writers, and is pleased that there are more female voices being published, but sees that both men and women are trapped in commonly held reductive and destructive ideas in our society.

It is a playful novel, for example, Kif labours under the illusion he has talent, and exudes a certain snobbery about his opinion on being ‘better’ than Heidl. Kif is concerned that his literary career is over because of this book until he realises he hasn’t published a book and so has no literary career to lose.

Update:July 30 – Richard’s opinion about writers’ festivals that no longer tolerate free thought or provocative ideas I didn’t want to write this …