Episode 1 from Series 5 of Home Delivery features Sam Neill and his emotional re-discovery of his childhood home and school in New Zealand. This half hour program makes a suitable related text for the Area of Study: discovery as there are many relevant links to be made with the rubric of this concept. Remember, it is not necessary to have a direct link with the themes or characters of your prescribed text, although it could well be beneficial to use this text to explore elements of discovery not explicitly evident. So, if you decide your prescribed text predominantly reveals a physical or intellectual aspect of discovery, then you might consider how Zemiro encourages Neill to explore an emotional discovery.

This episode breaks the established format of Home Delivery, providing the audience with Neill’s singular perspective eon his childhood. Usually, a childhood friend or teacher is interviewed to share corroborative evidence or sometimes disagree with the subject’s memory. Another shift in our expectation is caused by Neill’s focus on two different places of significance: his home in McAndrew Bay on one arm of dunedin Harbour and his time as a boarder at Christ’s College in Christchurch.

During the tour of his home on Howard Street, he details a delightful memory of his brother reading to him (from an adjoining bedroom) at night. Neill become teary when recalling two important discoveries about his father:

Otherwise characterised as ‘very handsome but quite remote’ Neill’s father married a soldier’s daughter who was ‘staunch’ and never cried. 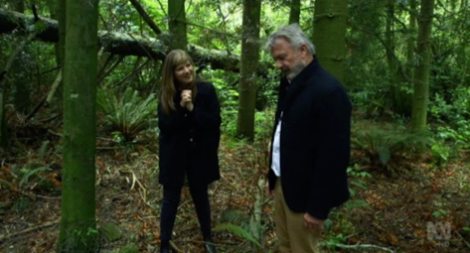 We then travel to the country woodlands where Neill’s parents spent their last twenty years, described as ‘where my parents are scattered’. He states that this is a ‘sacred place’ where he ‘feels his parents presence.’

In the closing moments of the episode, Zemiro asks Neill why he is so successful as an actor: ‘you have a genuine interest in people’. He explains his love of people – knowing them, observing them, understanding why people behave – by quoting a Maori expression:

This revelation reminds us of the importance of personal connections in effectively knowing our world.

Neill describes himself as a ‘serviceable, durable and useful actor’ and thanks Zemiro: it’s been a funny old trip’.