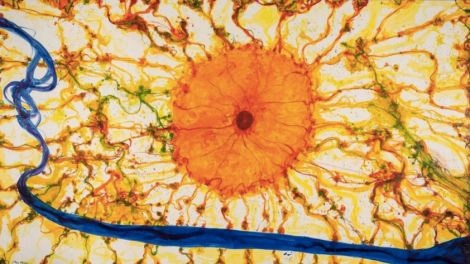 On the Wednesday prior to the Writing Teachers Newcastle meeting, I enjoyed a working lunch with Penny Bell (affiliated with the South Coast Writers Centre and University of Wollongong) at Cafe Rosso in Bowral to discuss future projects. We sat beneath a print of Olsen’s work, and during our meal a neighbouring table was filled with three men. One of whom was John Olsen who has a workshop nearby in Robertson. Penny introduced us and we began a pleasant cross table chat.

When John learned I taught English, he explained his love of poetry. He believes that many people are a little frightened of reading poetry. He advocates leaving the book open and accessible so that you might read and think and return to the poem, again and again. I mentioned that I was leading a group of teachers through a creative writing workshop at the exhibition of his work in Newcastle. John invited me to be part of the birthday celebrations scheduled for Saturday, January 21 at the gallery. John left me with a parting quote: ‘footfalls in the echo of memory’.

Arriving at the gallery ahead of our meeting time, I learned of the inspirational connections of nature and water, both fresh and salt, between Olsen and TS Eliot. Indeed, his quote is from ‘The Dry Salvages’ written in 1941 and published as part of Eliot’s Four Quarters. Scott Bevan effectively captures his understanding of Olsen through shared conversations in the exhibition catalogue (well worth the $5 purchase price).

Notes beside King Sun & the Hunter, explain that Newcastle Art Gallery’s requested he

create an iconic painting that would capture the essence of his birthplace to be hung for this event. Captivated by the Hunter River and inspired by T.S. Eliot’s The Dry Salvages,  the artist returned to Newcastle in April 2016 with his sketchbook in hand, documenting through lively charcoal drawings, the Hunter River and Newcastle harbour’s monolithic coal loaders and ships.

The National Gallery of Victoria is currently showing Olsen’s work under the title of The You Beaut Country. Sadly, it will finish before I travel to Melbourne in early March. There is, however, a 1956 painting by John titled Dry Salvages. This is on loan from the Art Gallery of NSW – hopefully, I will see it one day. (actually, the exhibition will be in Sydney in late February).

While chatting at lunch about food and cooking, John and his companion Carlos recommended a newly published book titled Buns in the Oven – John Olsen’s Bakery Art School that recalls the passion of

John Olsen’s Bohemian art school, The Bakery Art School, was a uniquely exciting arts institution that deserves to be better known. Established in an old bakery building in Sydney’s Paddington in 1967, the school ran until 1970. In this book about Olsen and the school, Juliet Schlunke, a former student, eloquently captures the mood of the late hippy era in Sydney and the influence of John Olsen on a generation of young artists. Olsen’s teaching methods are discussed, as well as his life-drawing classes and his preparation of lunches for students and visitors including William Drysdale, Bill Rose, Fred Williams, Janet Dawson, Rudy Komon, Peter Upward, Clif Pugh, Robert Walker and Ann Thomson.

While this was indeed an interesting text, I chose to buy another recently published book: John Olsen – a recipe for art. It is a beautiful text full of artworks, recipes, quotes, sketches and moments from sharing food – one that deserves to be dipped into and left open, revisited again and again.

Olsen reflects on his first trip to Spain:

I remember stopping for lunch at a tiny fishing village and there, laid like a tablecloth upon the sand, were long fishing nets – men and women dressed in black but barefooted, donkeys, carts, fishing baskets. Unlike France, which seemed all air and atmosphere, this was figured in the air of symbolism, the shadows for example were more distinctive and fascinating than the actors who cast them. The yellow sand, the white village houses, the cart wheels in shadow revealed an intense atmosphere of surrealism. In an instant I could understand the Spanish tradition; Zurbaran, Velazquez, Goya, Dali, Picasso. The Spanish lineage did not explain itself in floral tributes but in blacks, leather browns, burnt reds, blood like crimsons, chamois candle whites.

And the title of print in Cafe Rosso? Seafood paella, of course.

Full text of the poem