Our Perspectives unit in Year 9 (Stage 5) includes an examination of war poetry, though I have extended this to include perspectives of violence and war. We have been studying both song lyrics and music videos to explore the different ideas and themes of musicians, as well as discuss our own understanding of how our perspectives have been shaped. Students have shared a sophisticated awareness of the impact of social context and personal experience in recognising their own views. Despite being a small class, we have successfully collaborated throughout the process of writing a triple TEEEL paragraph.

Dire Straits released ‘Brothers in Arms’ in 1985, although it was written in the aftermath of the ten week long Falklands War in 1982. The 5 minute long music video uses rotoscoping, a form of animation which involves tracing over film footage frame-by-frame. Nowadays, this is more commonly achieved by computer. Images of the band performing the song fade into a symbolic narrative of soldiers at war.

Your valleys and your farms

We began our analysis by reading the lyrics and sharing our thoughts about meaning. We then watched the music video. This enhanced our understanding, before returning to the lyrics to annotate different language features.

We combined our ideas for both texts in a venn diagram represented by this image: 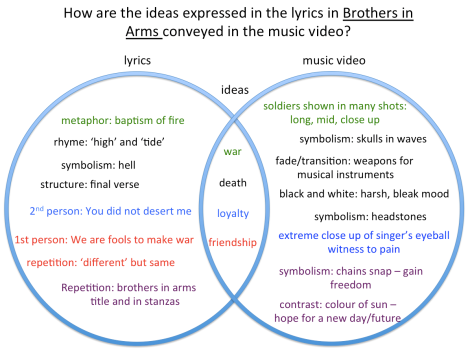 Next, we revisited the question and identified the key terms before suggesting synonyms. This should help avoid repetition which can limit the depth of your argument:

There’s so many different worlds

So many different suns

And we have just one world

But we live in different ones

We also reviewed our understanding of an analytical paragraph using the Triple TEEL format. 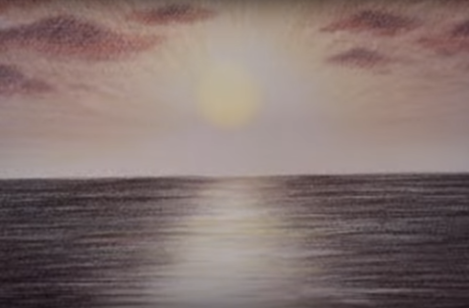 Before drafting and editing our final paragraph: 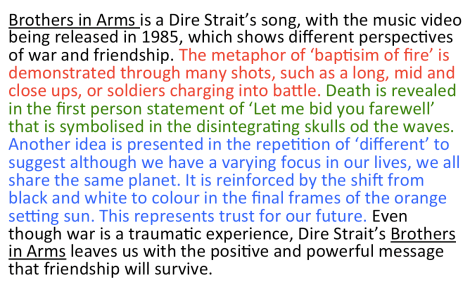 Related material (perhaps only sections are suitable for Stage 5) is the ABC TV documentary titled The Crater: a Vietnam Story that shares Australian and Vietnamese veteran’s perspectives. It also details the long struggle to recover the bodies of soldiers buried in a bomb crater.

‘Brothers in Arms’ was the soundtrack for the closing sequence of the second series finale of award winning American television series The West Wing. This episode was titled ‘Two Cathedrals’ and represents President Jed Bartlet’s struggle to make difficult decisions that benefit the country but come at personal cost. Snuffy Waldron, musical director for The West Wing explains these ideas in a podcast from the BBC’s Soul Music which went to air in September 2012.