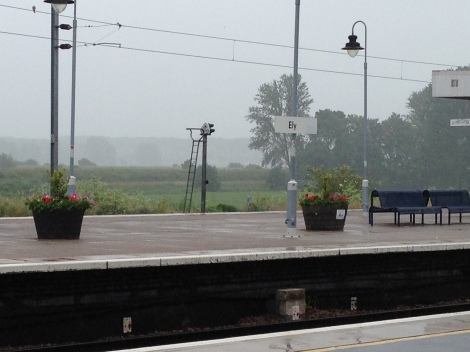 By June 22 I was travelling from Great Yarmouth to Stratford-upon-Avon which meant several change of trains with some reading inbetween. I pondered the campaign behind this book from the ‘author for every woman’ 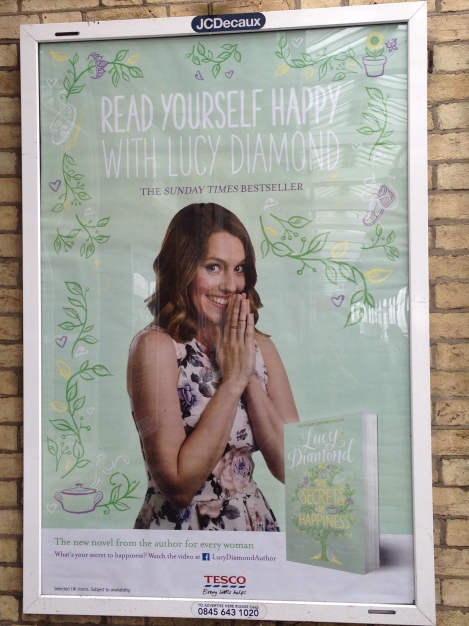 with a snappy Youtube tie-in. So, clearly, many feel that reading is important – especially if you are interested in creating … I imagine this could be appropriated for a classroom activity: What’s your secret to happiness? Perhaps some creative students could be quite subversive with this text …

Meanwhile, my purpose for being in Stratford-upon-Avon was to attend the NATE conference, deliver a presentation on student writing and English Textual Concepts and meet with Eva Gold who was also presenting on the English Textual Concepts. It was quite a shift from my free wheeling days of study to be part of an organised event that required constant communication and participation with like minded English teachers.

After settling into my hotel, I wandered the river’s towpath and headed into town. Finding the Chaucer’s Head second hand bookshop, I was greatly pleased to find this close to pristine 1937 copy of Marlowe’s Doctor Faustus for less than ten pounds! Imagine my delight to find Eva a short time later, who suggested we head to the RSC and see if there any available tickets for that evening’s performance of Dr Faustus. There were, we purchased and went: fabulous production! 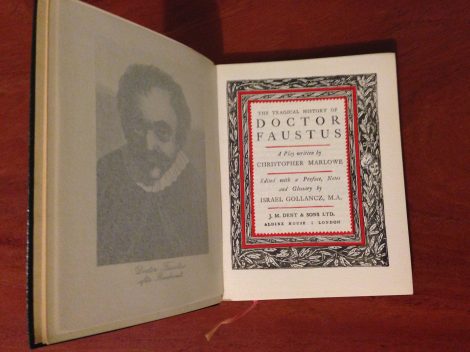 One benefit of attending a conference is the ‘show bag’ and looking through the freebies. I try to register early and sit somewhere quietly to read through all inserts and toss anything irrelevant. It always feel like Christmas to receive a free book, and this year it was

Settling on a random page to read, I found this gem from Kathleen Jamie in the chapter titled ‘Shortlisted Poems from the Best Collection Prize’

Tradition suggests that certain of the Gaelic women poets were buried face down.

So they buried her, and turned home

not knowing the liquid

trickling from her lips

would seek its way down,

and that caught in her slowly

toward light, so showing her,

when the time came,

how to dig herself out –

to surface and greet them,

of dirt, and spit, and poetry.

Every conference has an exhibition space for publishers and educational institutions. Amusingly, Pearson supplied a poet who wrote an acrostic poem for any who were brave enough to provide their name. It was worth the wait to see and hear a typewriter being used, particularly with the red and black ribbon! Some may not appreciate the technological shift, but many of us understand the extra pressure needed to operate a manual typewriter.

Interestingly, the two NATE conferences I have attended lean towards entertainment for the keynote speakers, such as John Hegley who opened the conference with poetry and ukelele playing. To close, illustrator Chris Riddell explored the importance of creativity, reading and teaching in a world of standardised testing. He kindly shared his images for attendees (just as well as my photographs did not, in any way, do justice to his work) and I share this illustration of Neil Gaiman’s thoughts on librarians:

With promises to return for the ‘international’ focus of NATE in 2018, I headed for the train station on Sunday morning – is that some blue sky? – and waited for the first of two trains that would take me to Plymouth. I was not looking forward to the uphill drag and shuffle of luggage from Birmingham Moor Street Station to New Street Station. During my station switch into Straford-upon-Avon, I found the short trek from New Street to Moor Street crowded with the highest number of professional beggars and pickpockets I had encountered on this trip. As I stood at traffic lights to take a photo of Moor Street, a police car came around the corner, stopped in front of me and called out to a guy standing behind me. I turned and saw a pickpocket hovering nearby: lucky escape. Now you understand my concern about this return trek.

Fortunately, as I sat at the station and subsequently boarded the train for Birmingham, I met Karen Edwards, who turned out to be Professor in English at Exeter University. We chatted happily about many issues: politics, future goals, reading and writing. Karen recommended Alan Bennet’s The Uncommon Reader, though during our conversation her title slip lead me to investigate Virginia Woolf’s The Common Reader during my google search … serendipity indeed.

On a more personal note, I suggested a powerful read that I had purchased at Rizzoli in New York. The Violet Hour: great writers at the end by Katie Roiphe is an interesting book that suits chapter reading and contemplation in the manner of good non-fiction texts, rather than un-put-downable consumption. This text explores the final days of Susan Sontag, Sigmund Freud, John Updike, Dylan Thomas, Maurice Sendak, and James Salter as well as an exploration of illness and death in Roiphe’s compelling Prologue. I highly recommend The Violet Hour. 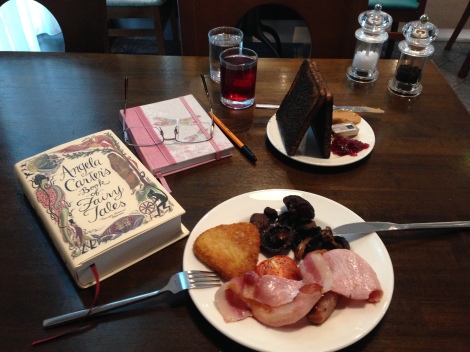 I usually eschew reading at breakfast when travelling; there always seems to be something to watch in a busy hotel dining room. However, I broke this when at Plymouth because of Angela Carter’s Book of Fairy Tales. I found this the perfect accompaniment due to the number of short narratives that could be read between courses and toast cooking. I mixed it up a bit by choosing to alternate my reading between ‘Chapter 2. Clever women, Resourceful Girls and Desperate Stratagems’ with ‘Chapter 3. Sillies’ and ‘Chapter 4. Good Girls and Where It gets Them’. It was also fun to flick through the hardback in search of illustrations by Corinna Sargood. This edition brings together two earlier Virago collections and is small enough to fit into any sensible woman’s handbag.

Karen’s recommendation did not disappoint! Easily read in a few train trips from Plymouth to Falmouth and Penzance, The Uncommon Reader had me snickering and guffawing aloud. Sometimes I was limited to a wide grin if the train was crowded … The ‘uncommon reader’ is none other than the Queen, who stumbles upon a mobile library behind her palace when chasing a runaway corgi. I loved the beautiful symmetry of the first and last books purchased in the UK: Mobile Library and The Uncommon Reader. Representative of my wonderful study tour.

A gloriously entertaining comic narrative, but it is also much more: a deadly serious manifesto for the potential of reading to change lives.

Witch Child, by Celia Rees, is a YA novel that came as a ‘freebie’ from FLY at UEA.