This age old maxim is a useful starting point when considering your written response. After reading marking feedback, consider how improvements could be made. An earlier post suggests that you cast a critical eye over your response  and consider how effectively you have used an active voice.

If you have been asked to re-write an essay, it would be wise to tackle this from a drafting perspective, rather than making simple changes such as spelling corrections or replacing repetitive words with synonyms.

Always start by asking: how could this be improved? Break down your response into clear components: thesis statement, introduction, topic sentences, textual evidence, linking sentences, conclusion, AS WELL AS sentence structure, language features and register. It is not acceptable to finish a conclusion with a rhetorical question, particularly if there is no clear thesis or cohesive argument; you cannot assume the marker will look between the lines or search for your ideas.

in your analytical extended responses. The lack of these can be readily identified if you read your finished work aloud. Then ask yourself:

The following images are from a lesson where students were asked to consider how their work could be improved. Work through these activities and apply your understanding to the process of drafting your own response.

Remember, for every over-used word or phrase, for each time that you condense overblown sentences, you are creating space to include more details and textual evidence that should see your writing achieve better marks.

Read aloud, this doesn’t make sense. Consider how meaning is clearly made 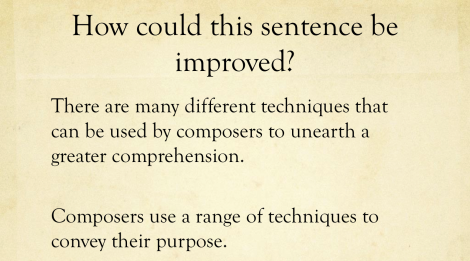 However, there is no clearly defined purpose. Read this sentence aloud. It claims to be a thesis.

See if you believe this is an improvement: 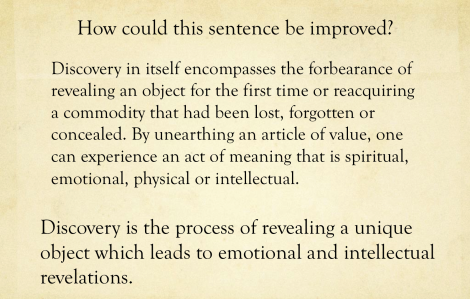 Notice how this example achieves clarity and economy? 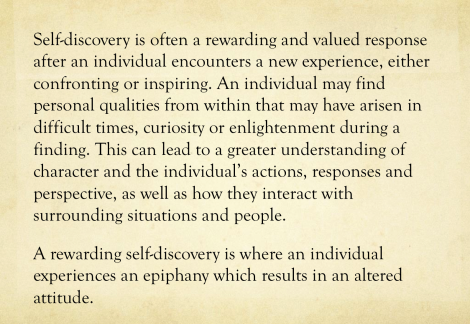 Sometimes, you need to step back and think about what you actually want to say. This distancing can be achieved by writing a draft early enough to allow for a few days to lapse before you read your writing aloud. If it seems quite convoluted, then write another draft to express your idea – in the fewest words – with sophistication.

Notice the repetition? Although some points are being made, it is quite general and repetitive. Consider this as a redraft:

The ideas remain, but each feature is clearly explained with specific detail that links back to an aspect of discovery, which is the key concept discussed.

Read through this conclusion and try to answer the questions:

Finally, notice how the following introduction lacks precision and clarity:

Your introduction should set a clear direction for your response. After addressing the question by writing your opening sentence to convey your understanding as a thesis statement, you should

Sometimes students try to write about two texts in one paragraph, yet fail to make clear points because they have not yet mastered the ability to write succinctly. It is better to write clear, separate paragraphs on each text rather than generally and repetitively on both texts in one large paragraph.

Remember: each paragraph needs to begin with a topic sentence to outline ONE idea clearly. The subsequent paragraph should contain relevant and specific evidence explained through textual features.

In drafting your writing to achieve clarity, economy and sophistication, it could be very useful to dare to write separate, detailed paragraphs on each text to systematically explore and explain each aspect of discovery, THEN consider a polished draft that effectively synthesises both texts to fully represent your argument