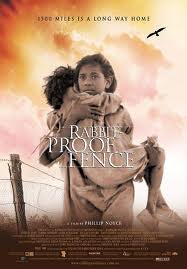 When choosing related material, many students are drawn to film as a medium that can be readily accessed and understood. Perhaps they are familiar with a text and recognise its value in representing important concepts, yet developing a rich analysis can be difficult. My golden rule is for students to aim for a minimum of five different language techniques or features per text. Many students should aim for at least two solid analytical paragraphs per related text, with at least five techniques per paragraph.

Movie trailers, as short multimodal texts, are ideal for study and avoid the tendency for less able students to simply retell. If a student limits their response to a description of the textual content, they are limiting their ability to access higher marks. Relying on descriptive retell often sees a response attract a ‘C’ range result, or worse.

If you have prepared notes for the full movie of Rabbit Proof Fence, consider how the trailer reveals many significant elements of belonging and not belonging. Specifically, this trailer works well with the play Rainbow’s End as I mentioned in a presentation earlier this year.