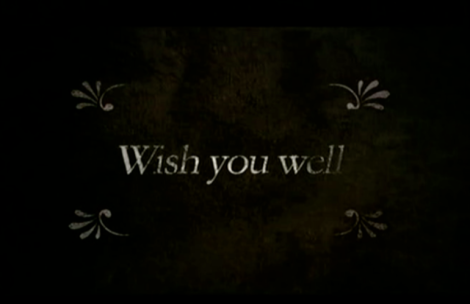 Bernard Fanning’s song Wish You Well was very well received and the accompanying music video, directed by Damon Escott and Stephen Lance was awarded Best Music Video in 2006. Many aspects of physical journey are revealed through both the lyrics and film techniques, which are supported by the music. Read how some Preliminary (Year 11) students have analysed this multimodal text in relation to the concept of ‘journey’ below. On my Notetaking page, you will find some resources using examples from Wish You Well – both the song lyrics and music video.

Life is an adventure, full of emotional fluctuations. Fanning’s 2005 music video Wish You Well displays the emotional and inner journey of a persona as he walks along a path through a forest after a break up. Fanning is singing in first person so it’s coming from his point of view. He also uses contractions in his lyrics, such as “didn’t” and “won’t” signaling colloquial language. These two techniques are used to identify with the listeners and help them empathise with the emotional journey the persona has travelled. The lyrics are also in past tense and in doing this relates it to the past and the memories he has. The repetition Fanning uses is positive towards his past lover, repeating “I just want to wish you well …” this repetition gets the point across that he wants to try and forget and move on to a happier course in life.

The video clip of Fanning’s Wish You Well shows the persona’s past and present inner journey as he travels the path through the forest. The props the director has used includes a frame through which the person reminisces and imagines the past. The frames include different pictures such as Fanning himself who appears in different frames at every angle symbolising his confusion and emotional thoughts. Words also appeared in the frames such as “Warning bell” Fanning extends the duration of the note when he sings important words or the words that have a deeper meaning when these words appear. Upbeat and repetitive music is used throughout the song. He uses the repetitive words “is dead” to make listeners realize that this is a deeper song than the cheery music indicates. Characters walking behind the persona may represent his past friends and family. Some of the characters walk directly across the path the persona is walking on symbolizing that they have momentarily affected his life. The techniques used in this music video will stay lingering in your mind and portray a deeper message about the emotional and inner journey, as it happens in life.

* taken from my article Thinking in the Key of MTV published in Screen Education 2012, Issue 66